The news tells you what happened.
Spectacles explains why that matters for democracy.
Instantly receive our exclusive handbook on how to spot the biggest threats to democracy when you confirm your email!
MINI-DOC: Cultists, Shotguns, and Nixon — the Shinzo Abe Assassin Story

He assassinated Japan’s most successful politician ever. But now, he seems to have won over public opinion. What happened?

He assassinated Japan’s most successful politician ever. But now, he seems to have won over public opinion. What happened?

On July 8, 2022, in Nara, Japan, Shinzo Abe was shot twice with a homemade shotgun by Tetsuya Yamagami. Despite Abe’s towering status in Japanese politics — a former prime minister, and Japan’s longest serving ever — Yamagami declared his motive personal rather than political — a grudge against the Unification Church. The catch? Abe wasn’t even a member. And yet, the public seems to have been convinced by Yamagami. Featuring mass weddings, Richard Nixon, Donald Trump, the bizarre theology of Sun-Myung Moon, his cultists the Moonies, and so much more, this is the story of the Unification Church, and it has a lot to teach us about how to balance the separation of church and state.

In the midst of a speech, he was shot twice with a homemade shotgun by Tetsuya Yamagami.

Despite Abe’s towering status in Japanese politics, Yamagami declared his action not political.

Instead, his motive was a personal grudge against the Unification Church—though Abe himself wasn’t even a member.

The assassination was met with outrage, as citizens across Japan mourned Abe as a martyr and offered support for the maligned Unification Church.

Or… that’s what you’d expect.

But in reality, public reverence for Abe quickly collapsed.

By the end of the month, a majority of Japanese opposed his state funeral.

What’s more, anti-unification-church sentiment has burst into the spotlight, driving Abe’s own party to cut all ties, accepting the assassin’s premise.

But that is just the beginning of this expectation-defying story, featuring mass weddings, Richard Nixon, the second coming of christ, an NC-17 retelling of the Garden of Eden, and so much more.

This is the story of the Unification Church and what it has to do with Shinzo Abe.

And it’s a story that has a lot to teach us about the tricky balancing act of separating church and state.

CHAPTER I: SO, ABOUT THIS CULT…

To start this crazy story, we have to travel back to the 1930s, to Japanese-occupied Korea.

Towards the end of the decade, a Korean teenager had a vision.

While praying one day, Jesus appeared before him and declared it would be up to him to complete God’s work on Earth, to bring about a world of peace and love.

Soon his vision had a scripture, the Divine Principle, a radical revision of Christian teaching.

Before long, the communist authorities of North Korea caught wind of his preaching and threw Moon in jail.

Though he escaped, this time in captivity made his crusade all the more urgent.

But what did Moon preach that was so radical?

Well, for starters, he rewrote the story of the Garden of Eden, asserting that Eve, rather than eating the apple, committed adultery with Satan—a completely new account of Original Sin.

Later, God put Jesus on Earth to save mankind, yes, but he’d actually meant for Jesus to get married.

Rather than his triumph, the lonely crucifixion was Jesus’s failure

But fear not, for the time had finally come for a new Christ—and, as luck would have it, Moon was just the man for the job.

But Moon’s theology was more than a rewrite of scripture and a declaration of his own divinity.

Lurking just beneath the surface was a peculiar political perspective, one informed by his own experiences of Japanese colonialism and North Korean communism.

According to Moon, Eve’s original sin of betrayal manifest in the real world in Japan’s brutality against Korea.

And communism was the work of Satan himself, an impediment to Moon’s holy mission of global harmony.

Hardly a church separated from the state, Moon’s theology was fundamentally political, and it would have global political consequences.

CHAPTER II: WHY THE MOONIES MATTER

As Moon yearned for the crucial support of the United States in his anti-communist crusade, he spied his opportunity in 1974: Richard Nixon.

As Watergate was bearing down, Moon called on his American followers to stand by the so-called “Archangel Nixon”, the President supposedly “chosen by God.”

For forty days and nights, thousands of so-called Moonies heeded the call with public fasting in support of Nixon.

In return, he thanked the fast-ers and received Moon in the oval office, catapulting Moon and his movement into the zeitgeist.

This was the beginning of a long friendship between the GOP and the Unification Church, lasting even to today.

In fact, in late August, mere weeks after Abe’s assassination, Donald Trump and Mike Pompeo spoke at a Unification Church event, praising the church for its committment to religious freedom and anti-communism.

And in Japan, the church’s political ties go deeper.

In the late 60s, right-wing Japanese politicians sought an alliance with the Church, establishing the International Federation for Victory over Communism, co-founded by Moon and former Prime Minister Nobusuke Kishi: Shinzo Abe’s grandfather.

Abe’s father, Foreign Minister Shintaro Abe continued the family’s ties, and over the years, the collaborative relationship between Japan’s dominant political party, the LDP, and Moon, deepened, as the LDP utilized Unification church members as campaign workers and volunteers.

Even today, recent surveys suggest that half of LDP lawmakers have substantial ties to the church.

But why couldn’t the Church resist nosing its way so thoroughly into politics?

The reason was simple: the church needed protection.

Over the years, it’s found itself the target of abundant social and legal scrutiny.

In the U.S., Congress and the FBI investigated the church, and a New York State court actually revoked its status as a religious organization for a time.

In Japan, it lost a number of high-profile cases in the Supreme court, mandating financial restitution from the church to donors and members.

Why all this scrutiny?

It turns out the church’s fundraising tactics aren’t exactly kosher, so to speak.

They regularly pressure marks with guilt over Japanese crimes against Korea, promises of relief in the afterlife for recently deceased relatives, and expensive objects with supposedly spiritual power.

The methods are deeply manipulative and blur the lines between politics, business, and religion, but they are effective, raising billions of dollars from Japan alone.

Meanwhile, the church’s favorable relationship with politicians paid off, too—whether it was Kishi or the Abes, Nixon or Trump, it was always helpful for politicians to back up the church’s legitimacy—after all, if nationally elected leaders said the church was doing good work, it couldn’t be that nefarious, right?

But one family’s story is illustrative of just how devastating the church’s financial activities could be.

A middle-aged Japanese mother, the typical mark for the church’s spiritual-financial schemes, was manipulated over the course of years into donating the equivalent of three-quarters of a million dollars to the church.

Her oldest son, stricken with cancer, committed suicide because he couldn’t afford treatment.

Her youngest son abandoned his college education because his family didn’t have enough money to support him; he, too, attempted suicide in 2005 so that his family might be able to make use of his life insurance.

Though he survived, that youngest son couldn’t let go of the trauma the church had wrought.

When he saw earlier this year that Shinzo Abe had addressed a Unification Church gathering, he resolved to finally take action.

Bound by Japan’s strict gun regulations, he formulated his own gunpowder from fertilizer and built a shotgun at home from wood blocks and metal pipes.

With two shots from this homemade shotgun, Tetsuya Yamagami rang an alarm in Japan’s collective consciousness.

All of a sudden, calls erupted for investigations into the church and its relationships with various politicians.

And so, in a way, the assassin won. Public opinion has soured on the church, and on Abe.

With this turn in public opinion, it seems the answer is clear—the Unification church ought to lose its status as a religious organization.

Except…imagine for a moment the consequences of applying this standard more broadly, and it’s easy to see the value in one of liberal democracy’s core tenets—that democratic decision-making can’t be used to deprive a minority of their basic rights.

But the Unification Church is hardly a church at all.

For decades, it’s abused its religious status, wading into politics and leveraging its spiritual caché to swindle the vulnerable out of hundreds of billions of Yen.

Yet with a little rhetoric and a helping of political violence, what religion couldn’t be convincingly described in similar terms?

Religion and politics—even as we might dream of separating them—are essentially inseparable, because each appeals to the same moral impulses in all of us.

The preacher and the politician, from the pulpit and the podium, both claim the same moral authority and righteousness

But that doesn’t mean all churches are the same, nor does it mean we shouldn’t try to separate them from the state, not least because that separation is a vital assurance that everyone has the freedom to worship as their heart and soul command.

But it does mean a good standard is hard to come by, and different countries have reached very different solutions.

The French hold to the philosophy of Laïcité—total separation.

Religion is almost never mentioned in political discussions or campaigns, and it is illegal even to wear symbols of religion—whether head-dresses or crucifix necklaces—in government buildings: according to some, an effective, but to most, a rather uncomfortable standard.

Meanwhile in America, a softer barrier is erected; while it’s technically illegal for religious organizations to endorse political candidates, individual preachers regularly make it clear to their congregation whom they support.

Today, conservative think-tanks acquire the status of religious organizations, as fundamentalist religious sentiment permeates politics, much of it hostile to democracy and the continued freedom of others to practice their own faiths.

While it’s easy to point to a specific case like the Unification Church and see that something is clearly wrong, it’s much more difficult to draw up a set of rules that can both prevent the emergence of scam religions and maintain freedom of worship.

But at the same time, it’s one of those difficulties that is imperative, even urgent, to grapple with, because the consequences of neglect—as Abe’s death reveals—are truly dangerous.

“Geopolitical Mission Strategy: The Case of the Unification Church in Japan and Korea,” by Sakurai Yoshihidevia in the Japanese Journal of Religious Studies.

“The Millenarian Dimension of Unification Thought,” by Lukas Pokorny in Korea 2013: Politics, Economy and Society.

00:00 — “Shinzo Abe Is Assassinated With a Handmade Gun, Shocking a Nation,”via the New York Times

00:29 — “What we know so far about former Japanese Prime Minister Shinzo Abe's assassination,” in NPR

02:36 — “The Millenarian Dimension of Unification Thought,” by Lukas Pokorny in Korea 2013: Politics, Economy and Society

02:36 — “Geopolitical Mission Strategy: The Case of the Unification Church in Japan and Korea,” by Sakurai Yoshihidevia in the Japanese Journal of Religious Studies

04:46 — “Donald Trump and Mike Pompeo spoke at a 'Moonies'-affiliated event, despite Japan controversy,” via Business Insider

06:15 — “Geopolitical Mission Strategy: The Case of the Unification Church in Japan and Korea,” by Sakurai Yoshihidevia in the Japanese Journal of Religious Studies

10:30 — “France’s laïcité: Why the rest of the world struggles to understand it,”via The Conversation

11:08 — “Right-wing think tanks are trying to become churches. Here’s why,” via WBUR

11:16 — “White Christian Nationalism ‘Is a Fundamental Threat to Democracy,’” via New York Magazine

Unification Church in Washington, DC via Josh (CC BY 2.0)

PRES. NIXON DEFENDS HIS OFFICE ON WATERGATE CHARGES, via the National Archives

My Japan, via the National Archives (CW: Racism)

Nixon and Moon, via US Government

Japan, via the National Archives

Richard Nixon, via US Government 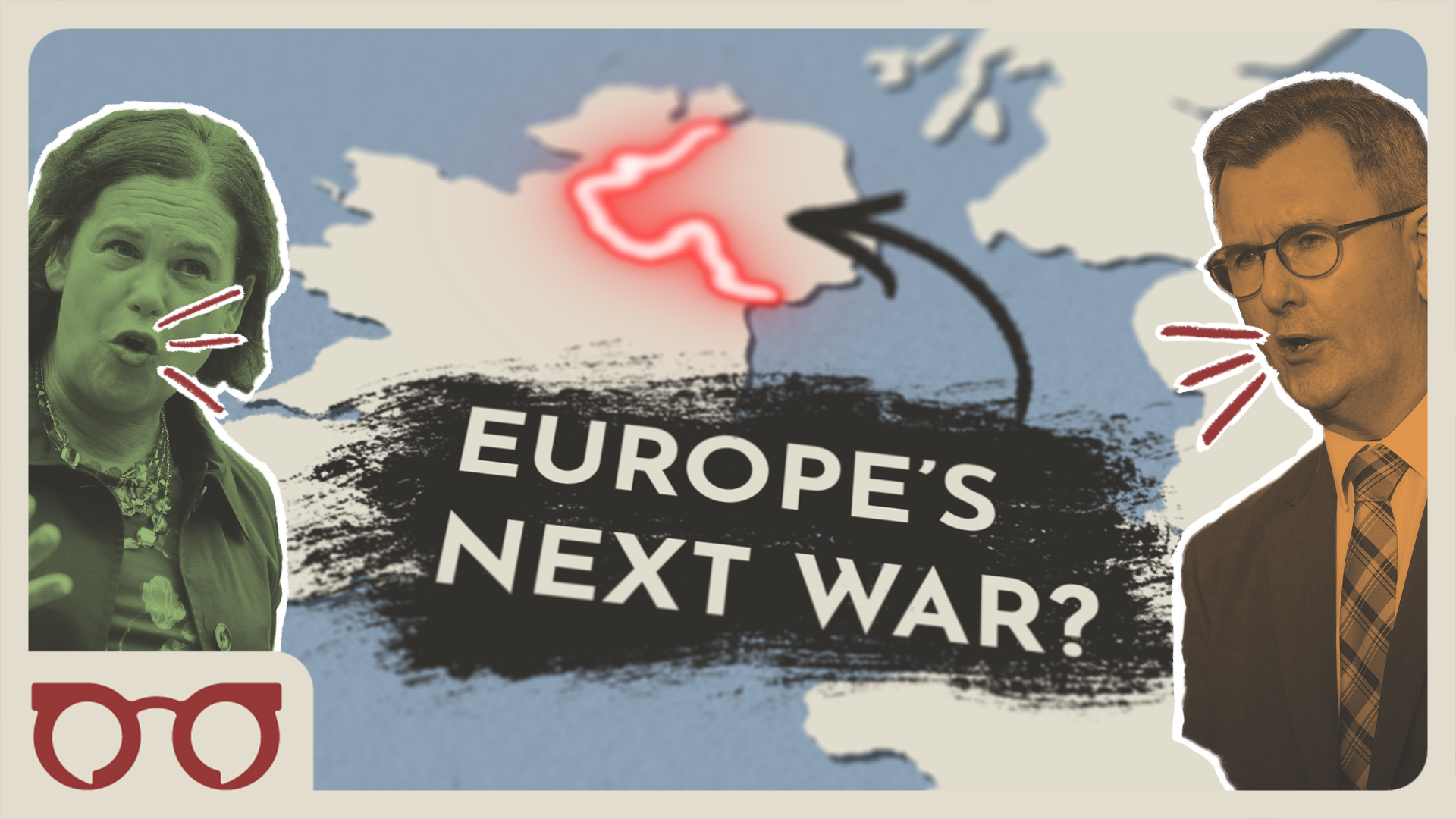